Thomas Kelly Brown is a senior honor student at Canadian High School, in the small town of Canadian, Texas. Thomas was born on September 13, 1998 and has been a life long resident of the town.

In his years through school Tom has developed a strong base of friends at the High School. Up until this past year he was a starter for the state championship Canadian High School Football team. His teammates describe him as a dedicated football player that made the hard decision to take a different direction this past fall and leave the game of football.

Tom is the president of the schools student council and is a superior student according to his teachers interviewed by investigators.

On the night of November 23, 2016, Tom left his home in the early evening hours and went driving around town with two of his good friends. They were listening to music and talking about the future and their plans for the future. Tom was described as being in a good mood and even had made plans for the next day with his friends and family.

At around 11:30  p.m. Tom said goodbye to his friends and was dropped off at his 2009 Dodge SUV in the parking lot of the middle school in Canadian, Texas. At 11:40 p.m. Tom was seen on camera pumping gas into his SUV - then driving off at about 11:51 towards the High School / Middle School area of town.

Tom's curfew was 12 midnight and at 12:03 p.m. Tom's brother texted him asking where he was as Tom was never late coming home without calling anyone. The message was never read - and at 12:10 a.m. Tom's cell phone sent it's last "ping" out which has been traced to the area on and near the parking lot of the football stadium.

At 12:23 a.m. Tom's mother, who was already worried, sent Tom a text to which investigators have determined was never read. At around 12:29 a.m. Tom's mother started trying to call him to which all calls went to voice mail.

Tom's mother became upset as Tom would always answer his phone and would call if he were going to be late. At around 1:30 a.m. Tom's mother activated the 911 system and the Hemphill County Sheriffs Office responded and began to search the city. At around 2 a.m. secondary units began to search the city as well as Tom's friends who were woken out of bed and their families.

During the evening two Red Dodge SUV's were captured traveling through the city of Canadian - however their positive ID to Tom's SUV could not be confirmed from the camera angles taken.

At approximately 6:50 a.m. a red Dodge SUV was captured on video coming into the area of the baseball fields on the sewer plant road. Camera's capture the red Dodge SUV driving up a small hill and parking in a remote area on the downside of the hill.

At approximately 7:30 a.m. helicopters were launched to begin a search of the city and surrounding deer leases in the area to rule out the location of Tom or his SUV. At approximately 8:45 a.m. one of the search helicopters located the auto in the remote area. Units from the Hemphill County Sheriffs Office were dispatched and arrived. Upon their arrival they found the auto unlocked, one window down halfway, and no signs of Tom. Missing items from the car were his cell phone without the chargers from the car, his home, and his book bag, his keys, his wallet and his school laptop.

Family and friends describe Tom as always locking his SUV doors and rolling up the windows.

Tracking and scent dogs were sent into the area which did find a track - but the dogs lost the scent.

Over the next week extensive tracking was executed with search teams from all over the Panhandle of Texas including police agencies from the state and local governments, fire departments in the county, and private citizens using ground vehicles from all over the surrounding counties.

Investigators have now expanded the search to areas within 40-50 minutes driving from the city of Canadian both east and west. As well investigators are getting more concerned that there is a strong possibility that a person or person's may have either taken Tom against his will or Tom agreed to go with a person not expecting there would be trouble.

Investigators are still examining evidence which could indicate that Tom left the area on his own, however, as the days go by that theory is becoming less of a possibility, as Tom has not used any money he had saved, any credit card that he had, or his cell phone or computer. 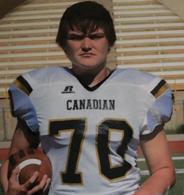